How to Identify Pests In Your Garden

Today’s post is an article written by my husband, Matt Christy. He will be sharing about pest identification in your garden and how to find out what is munching your plants or in our case, digging holes in our garden.

One fun fact about myself is that I love a good mystery. A movie, book, comic, escape room, television show, you name it!  I love the drama and how logic is used to problem solve the whole thing out. An area of life that I never thought that I would have to put on the ol’ sleuthing cap was when it came to gardening.

Let me explain the crime scene and let me warn you folks, it’s not pretty.

On the morning of the crime, I didn’t think nothing unusual was going on. The birds were chirping, my coffee was warm and delicious, it was a normal day. Until I heard my wife franticly call for me while she was outside in the garden. I raced outside as my dogs, now as concerned as I was, were in hot pursuit. There, my beautiful wife stood in the middle of our cherished garden with a confused look upon her face. All around us was numerous, strange holes about an inch in diameter in length, a few inches deep into the ground. That in itself wouldn’t be a problem, but sadly, two of our poblano peppers were victims, murdered and laid out for all to see. They had been ripped out. Their roots exposed and dried. They would never get to grow delicious peppers to add a bit of zing to a soup or make a smoky salsa. This was no longer a garden, ladies and gents, but a messy crime scene, and one with too many suspects and not enough clues.

As my wife and I continue to learn and practice homesteading, one key skill that is used in all aspects of it is problem solving. As for the Case of the Peppered Garden, I had my work cut out for me. My wife hired me on the spot, wanting me and our newly deputized dogs to sniff out the creature that made these holes and why the peppers had been dug up.

My first task of blowing this case wide open was to examine the dozens of holes that had appeared in our garden almost overnight. The holes were an inch in diameter, and only went about three inches deep into the mulch. Our garden has a layer of six to eight inches of mulch on top of it, providing a wonderful blanket of nutrients. The soil was untouched, meaning that moles and voles were not the issue.

Was there anything in the holes?

As I took a spade to one, I feared of what I could possibly uncover. In the short time my gardening, I have heard stories of wasps and spiders making holes in the ground for homes and being quite upset when provoked. I let out a sigh of relief when the hole revealed nothing. No pile of spider eggs or buzzing winged bugs of doom. More creatures to strike off the list. I was on a roll!

The next breakthrough was actually observing my wife and I’s two cocker-doodle mutts.

During our walks around our small town or when they freely roam on the farm, these two keepers-of-the-law maintain the balance of rouge bunnies and stray ne’er-do-well cats in the area. While I was examining the holes, my two deputies began to sniff around the garden and the surrounding yard. There was no wagging of the tail or an excited squeaky bark. So no rabbits and cats were ever near the crime scene, at least not today.

Now that I had more info on the strange holes and was able to make a list of creatures that couldn’t have committed the crime, it was time for research. I made another, stronger cup of coffee, gave my two furry assistants the rest of the day off, and I started an online investigation. Despite all the facts I was able to type in, there was still a long list of possible suspects to look into. Squirrels, raccoons, rats, and even slugs have been known to cause trouble in gardens. My job was far from over. My next move was a classic, a stakeout!

That night I quietly made my way to the garden, armed with only my wits and a big plastic flashlight. As soon as I stood by the garden, I flashed my light at the mulch covered area with determination! Alas, nothing was there to greet me, no pest to fight off in a man against nature scenario. I would not return to my wife with a new trophy to add to the mantel. With a sigh and a heavy heart, I made my way inside. Perhaps tomorrow my wife and I would get the closure we so wanted – the justice for our pepper plants!

And justice did come in the morning of the next day, when I saw with my own eyes the beast that attacked our innocent garden. The creatures? Birds, who would land in the garden, stick their heads in the mulch, then take off in flight, usually with a piece of mulch for nest building, or a possible grub hiding in the mulch. It all made sense now! We have dozens of birds fly around our house daily and it was the season for nest building. Another fact is that the mulch that we use sometimes has bugs in the wood that survived the chipping process. The birds were not tearing up our plants on purpose, the plants were merely at the wrong place at the wrong time when the birds would dig in the mulch. The birds never even took the plant after digging it up.

At first, my wife didn’t believe me and my fellow doggy officers. She was still in shock from the crime, you see. Alisha raised those pepper plants from seedlings, so it was hard to see them ripped from the earth. After some discussion, there was mention of seeing numerous birds in the garden, pecking around.

I closed the case, no charges filed. The case of the Peppered Garden had come to a close.

When dealing with a possible pest in your garden, or yard, there are many clues to look for in identifying the culprit. How big are the holes? Are there animal waste near the holes? Are there any tracks that lead to and from the scene of the crime? The smoking gun of course would to see the animal in question in action, like I was able to. Once you get some details of what you observed, it’s time for the research portion of the investigation! It can be anything as typing a simple question like “What causes one-inch holes in my garden?” in a search engine. Or diving into complex gardening forums and listing off all the details to anyone that will listen. Usually, the specific facts of what you, the gumshoe homesteader, had observed will help narrow the search for the pest down, with solutions right around the corner. Each pest has their own agenda with your garden, their own set of fingerprints that they leave after the crime is committed, ripe for the detective that you are to throw the book at them!

Hi, my name is Alisha! Welcome to WholeMade Homestead, an encouraging place where you’ll discover nourishing recipes, ways to live naturally and tips for living the simple homestead life.

Get wholesome recipes, DIY tutorials and advice for running a homestead straight to your inbox.

You have successfully subscribed! 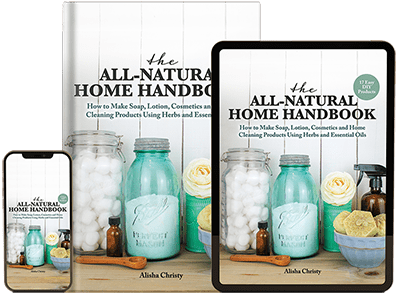 The All Natural Home

Get 17 Easy DIY Products for Your Health and Home

You have successfully subscribed!